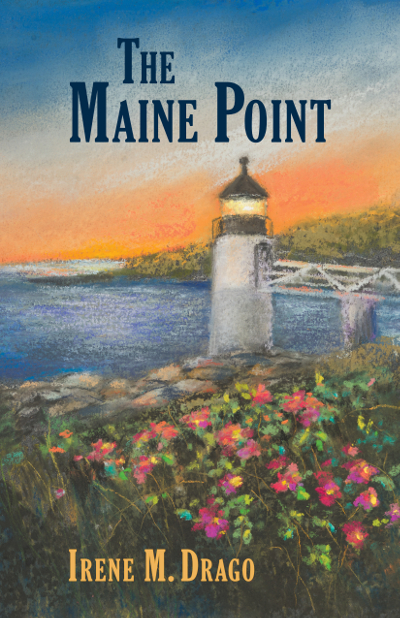 Sequel to Daughters of Long Reach.

When Anna Malone, a Maine screenwriter, rents an apartment at Marshall Point, she’s inspired to write about its historic lighthouse. As she prepares to publish her first novel, she meets Dan Leone, a New York editor, and they soon discover their Maine connection: Their grandmothers, Stella Rose and Penélope Solis, both daughters of Yankee sea captains, were cousins who left Bath in the 1930s to work at National Screen Service in midtown Manhattan. Their paths diverged during World War II, as one became a Navy nurse and the other the owner of an iconic movie theater. Weaving present and past together, The Maine Point continues the story of Daughters of Long Reach and illuminates how “fair winds and following seas” can bring a family home.

Award-winning author Irene M. Drago grew up in a Navy family. Before moving to Maine, she worked for the Defense Department as a Russian analyst, earned a Master of Arts degree in Spanish language and literature, and taught at the high school and college level. When she fell under the spell of a historic home in Bath, she convinced her husband to follow her to the coast of Maine, where she was inspired to write Daughters of Long Reach and its sequel, The Maine Point. Ms. Drago is the recipient of a Next Generation Indie Book Award and a Spirit of Bath Award. In the summer, she and her husband enjoy piloting their boat around Casco Bay with their children and grandchildren.