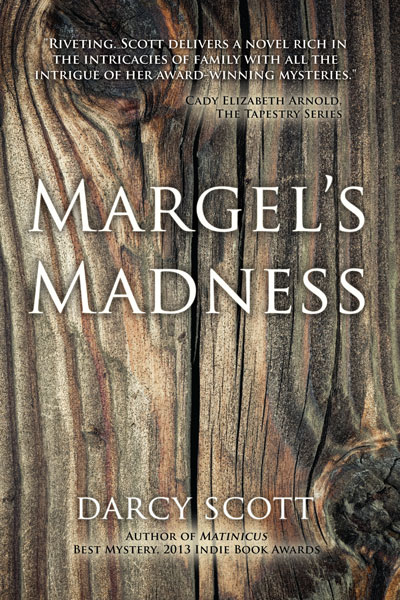 Award-winning nautical mystery writer Darcy Scott sails her authorial craft into deeper waters with Margel’s Madness, an unflinching, semi-autobiographical take on a young woman’s determination to make a fresh start—an extraordinarily powerful tale of family secrets, emotional betrayal and hidden death.
Tension is high in Mosquito Harbor, Maine, where the eccentric Cousins family is facing off against wealthy escapees from urban sprawl determined on carving out their own piece of the coast. Edgy, intense Margel Matthews, a 30-year-old single mother also “from away,” is an escapee of a different sort. Having broken with her toxic family, she lands in town desperate for a quiet life with her free-spirited, four-year-old daughter, only to find herself befriended against all local tradition by the Cousins’ crusty, seventy-year-old patriarch.

When her mother’s death draws near, Margel is forced into a guilt-ridden re-involvement with all she left behind, only to be rocked by explosive revelations about the part she unknowingly played in the unspeakable betrayals of her childhood. As she fights to protect her daughter from the horrors of her past and a darkness she, herself, carries, a shocking discovery shakes the town to its core and she’s forced to choose between a fleeting chance at happiness and her responsibilities to those she loves.

Award-winning author Darcy Scott  (Best Mystery, 2013 Indie Book Awards; Silver Award, 2013 Readers Favorite Book Awards; Bronze Award, 2013 IPPY Awards) is a live-aboard sailor and ocean cruiser who’s sailed to Grenada and back on a whim, island-hopped through the Caribbean, and been struck by lightning in the middle of the Gulf Stream. Her favorite cruising ground remains the coast of Maine, however, which serves as the inspiration for much of her fiction, including Margel’s Madness and the Maine Island Mystery series—Matinicus, Reese’s Leap,and the upcoming  Ragged Island (March, 2016).  Read more about her at www.DarcyScott.net.