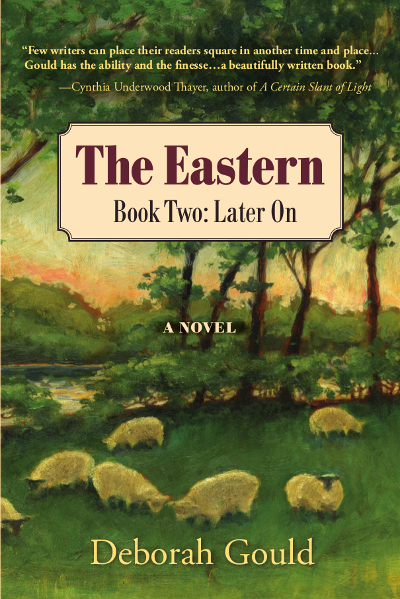 The highly anticipated The Eastern, Book Two: Later On!

After the Civil War, the Eastern River families of Pittston prosper during Maine’s Golden Age of Agriculture. As they move into the 20th century, however, social and industrial changes present challenges to the close-knit agrarian neighborhood.

“I can think of no other writer who renders rural Maine on the page as well as Deb Gould. She captures the cadence and rhythm of generations of Maine families living on the Eastern River and allows Maine itself to shine and sing until the very land—the farms and fields and rivers—becomes the main character.”
—Susan Conley, author of Paris Was the Place

“Few writers can place their readers square in another time and place… Gould has the ability and the finesse…a beautifully written book.”
—Cynthia Underwood Thayer, author of A Certain Slant of Light

Deborah Gould once owned the Joel Thompson homestead on the Eastern River in Pittston, Maine. She has lived on a dairy farm, owned a graphic arts business, and worked in English language acquisition for students with cochlear implants. A three-season resident of Brunswick, she summers on Flying Pond in Mt. Vernon.